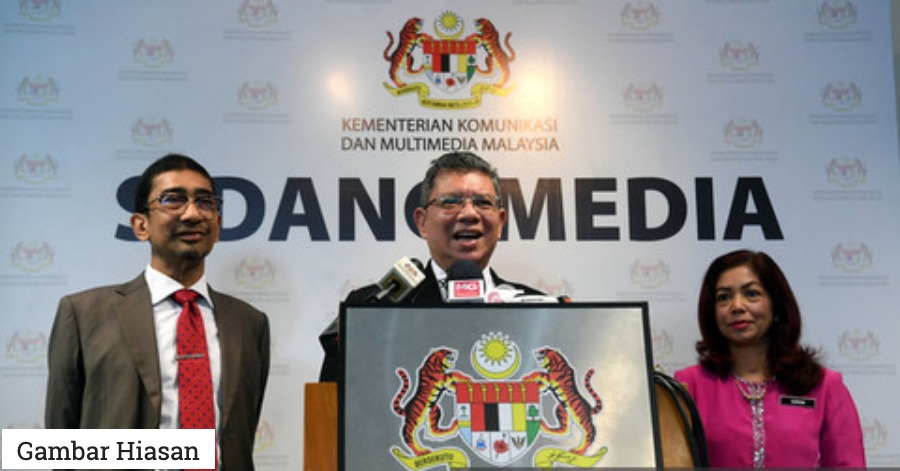 PUTRAJAYA, March 12 (Bernama) — The new Communications and Multimedia Minister Datuk Saifuddin Abdullah has vowed to uphold media freedom and not to compromise on fake news.

“I am still the same Saifuddin that upholds freedom, democracy, human right and the rule of law.

“I stand on my principle. While we must uphold freedom (of the media), we cannot compromise on fake news,” he said this to reporters at his first press conference as Communications and Multimedia Minister under the Perikatan Nasional government here today.

Saifuddin said he would also look into the Anti-Fake News Act, which was repealed by the Dewan Negara in December last year.

“I understand that there was an anti-fake news law and the revocation of it. It would not be fair if I would make any specific announcement on how we will deal with it because it involves other ministries too but this would definitely something I will take up,” he said.

Asked on continuity of key projects under the Communications and Multimedia Ministry (KKMM) including the National Fiberisation and Connectivity Plan (NFCP) and 5G roll-out, Saifuddin gave the assurance that all the good initiatives should continue despite the change in the government.

“It will continue. We have to be business-friendly, our role is to facilitate the telco industry. Whatever that has been done in the past that is good, and until or unless there are serious issues, I think it should be continued,” he said.

On the RM3 billion allocated for the NFCP announced in the Economic Stimulus Package 2020 on Feb 27, Saifuddin said the allocation remained intact for now and the plan to roll-out was still on track.

“But the Prime Minister (Tan Sri Muhyiddin Yassin) mentioned yesterday that they are trying to review (the package) with the view of some addition. So as much as we want to roll it out as quickly as possible, we will talk to the Finance Ministry to see what is the situation is. If we are not part of the new reviewed stimulus package, then we will roll it out as quickly as possible,” he said.

Saifuddin said he was excited to be part of KKMM and intended to bring back Silicon Valley Comes To Malaysia symposium this year.

In 2011, when Saifuddin was the Deputy Higher Education Minister, he was actively involved in the field of entrepreneurship with the promotion of the Silicon Valley Comes To Malaysia symposium and start-ups.

Asked whether the idea to set up the Malaysian Media Council would be continued, Saifuddin said:

“I need to get a full briefing on that and see how far it has progressed and what is the next suitable action to be taken.”