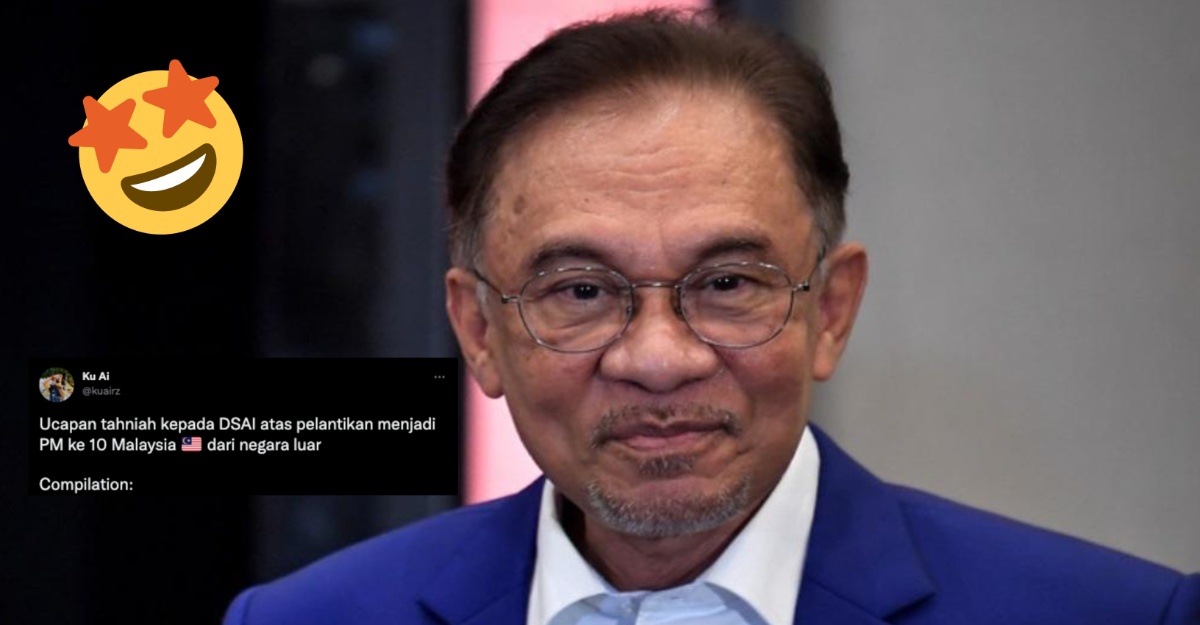 Prime Minister Anwar Ibrahim is definitely the main topic that many people are talking about right now. Amazingly, it is not only from the local people but also from people all over the world. His recent appointment as the prime minister has made him receive a lot of congratulations and kind wishes from worldwide figures. That are such kind gestures from them toward Anwar Ibrahim.

To those who do not know, the chairman of Pakatan Harapan, Anwar Ibrahim finished swearing in and became the 10th Prime Minister of Malaysia yesterday. The swearing-in ceremony was held at Istana Negara in front of DYMM Yang Dipertuan Agong. This is the compilation of all the congratulations and kind words that he receives from many worldwide figures starting yesterday.

Firstly, is the USA Embassy

Secondly, would be Pakistan

Wishing @anwaribrahim the very best as new PM of Malaysia. Respect his Statesmanship.

Next, is going to be Japan

Congratulations to YB Dato’Seri Anwar Ibrahim @anwaribrahim, who has been sworn in as the 10th Prime Minister of Malaysia.
I sincerely hope that the new government will lead Malaysia in unity and further promote the  🇯🇵🇲🇾 relations. https://t.co/ODQymYo4pa

After that, is Palestine

Congratulations DS @anwaribrahim for the appointment as Malaysia's 10th Prime Minister.
I trust the Palestinian issue will remain one of Malaysia's top priorities under your Excellency's leadership.

-Photo was taken few days after DSAI's release from prison in May 2018. #Anwar pic.twitter.com/CC2VYmJjn5

Other than that, there is also Qatar

Not to forget, Australia also joins in

Next, is going to be Taiwan

The government of #Taiwan🇹🇼 congratulates @PakatanHarapan_ Chairman @AnwarIbrahim on his swearing-in as the new prime minister of #Malaysia🇲🇾. We look forward to further strengthening ties between our countries & promoting regional peace, stability & prosperity under his tenure. https://t.co/lOQMsI3BSn

After that, would be Indonesia

Other than that, is Somalia

It's my honor to congratulate my good friend @anwaribrahim for this historic & decisive election and becoming the 10th Prime Minister of Malaysia. I wish you all the best in your new role insha Allah. pic.twitter.com/U0c0NMEPu6

Last but not least, the Turkey Ambassador

I would like to congratulate YAB Datuk Seri Anwar Ibrahim on his appointment as the 10th Prime Minister of Malaysia. Türkiye is ready to enhance already existing excellent relations between two friendly and brotherly countries. 🇹🇷🇲🇾@anwaribrahim pic.twitter.com/7RbHt3r22o

So many of these amazing wishes really show the great relationships personally and politically that our country, Malaysia has with all the other countries. Hopefully, Malaysia can be a much better country.

As previously reported, The Yang di-Pertuan Agong, Al-Sultan Abdullah Ri’ayatuddin Al-Mustafa Billah Shah, today agreed to appoint Datuk Seri Anwar Ibrahim, as the tenth Prime Minister. Datuk Ahmad Fadil Shamsuddin who is the Datuk Pengelola Bijaya Diraja said, “The appointment of Anwar, who is also the Chairman of Pakatan Harapan (PH) as Prime Minister, was made in accordance with Article 40(2)(a) and Article 43(2)(a) of the Federal Constitution”.