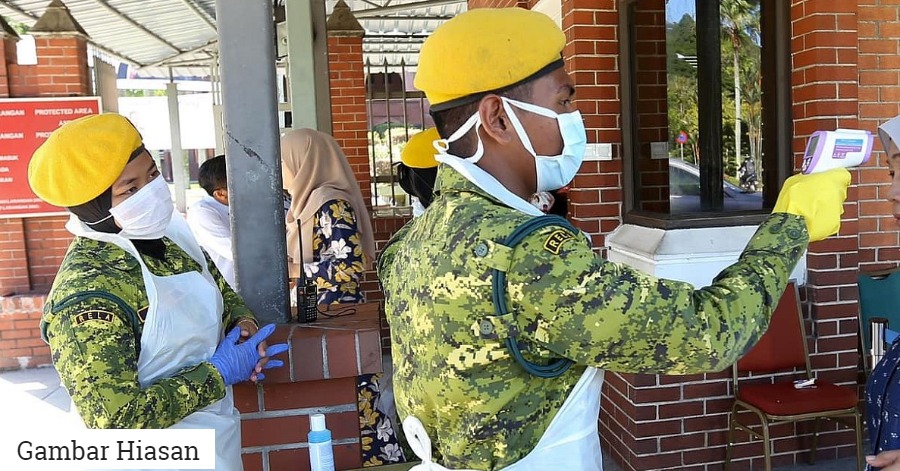 ARAU, March 24 (Bernama) — Security personnel from the Royal Malaysia Police (RMP), the Malaysian Armed Forces (MAF), the Immigration Department, as well as medical practitioners from the Ministry of Health (MoH) and other agencies are now at the forefront in the fight against the spread of the COVID-19 infection.

While mentioning these national heroes, we shall also not forget the personnel from the People’s Volunteer Corps (RELA) who assisted the police, military, MoH and many other enforcement agencies to enforce the Movement Control Order (MCO) to curb the spread of the COVID-19 infection.

These RELA personnel are from diverse backgrounds, and they are now leaving their families behind and facing the risk of contracting COVID-19 virus while joining others on the front line.

One of Perlis RELA personnel, Hafizul Khalid, 35, from Jejawi, who is also a teacher, said, despite the MCO period which he could use to spend time with the loved ones, he decided not to return to his family in Sungai Petani, Kedah.

“To ease the pain of missing them, I will make video calls every time I’m off duty … even though I know family time is very important to me as a father… at the moment serving the people and the country are my priority,” Hafizul told Bernama here today.

Also shared Hafizul’s sentiment is another Perlis RELA personnel, Kong Heng Guan, 41, from Jejawi, who said that he has always been interested in volunteer work despite being ridiculed by a handful of people.

“I understand that many are stressed out due the current situation, but I don’t take their comments to heart. For me, what’s more important is helping everyone to comply with the MCO,” said Kong, a labourer.

Meanwhile, Perlis RELA director Ahmad Muazzan Shah Mohd Salleh said that a total of 200 personnel have been deployed to serve in the three districts, namely, Kangar, Padang Besar and Arau during the MCO period from March 18 to 31.

“Currently, about 46,000 members are registered with us (RELA). However, the 200 personnel deployed during the MCO are those who have completed various courses, especially the ‘Crisis Respond Team’ (CRT) module.

“This CRT module is capable of preparing RELA personnel to deal with disasters such as floods, emergency and outbreak of diseases such as COVID-19,” he said to Bernama.

Ahmad Muazzan Shah said RELA personnel assisted the police and the military in accordance to the regulations stipulated under the Prevention and Control of Infectious Diseases Act 1988 (Act 342). Outdoor activities have long been praised for its benefits on physical and mental well-being, both of which have gained significant attention during the pandemic....