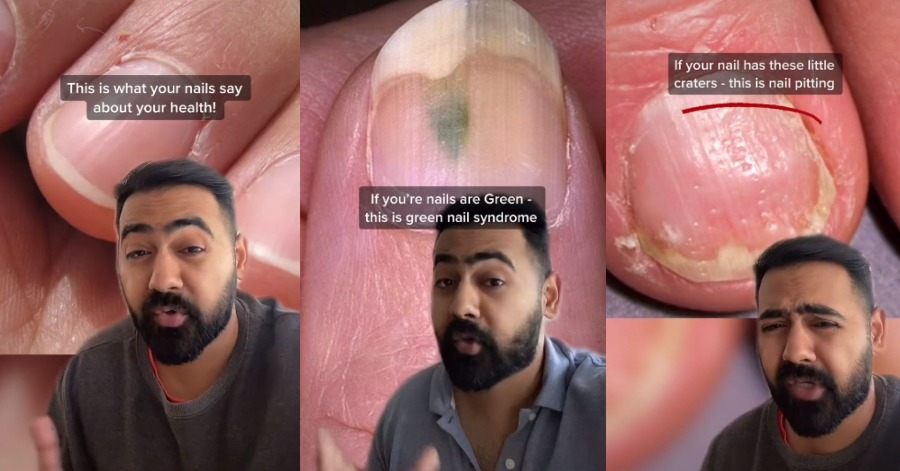 It may not seem like it, but a person’s nails can say a lot about their health. It’s true! A closer inspection at these tiny sheets of keratin can reveal everything from lung disease to allergies. Well, it turns out to be really true that our own nail health is closely associated with how well our body is functioning in other areas. You should take note of this.

Healthy nails are considered to be smooth with no discoloration, but if there’s something amiss with the texture and also the color of yours, you have to really understand what you are dealing with in your health. Learn what your nails may suggest about your own health that you don’t know with these 2 part videos that went viral on the TikTok app.

It is common and usually normal for a nail to look like that. It can also be chased by physical injury to the nail.

In rare cases, this can be a subungual melanoma which is a type of skin cancer.

It is usually called nail pitting. It can be caused by psoriasis, arthritis, and also eczema.

The common culprit would be a fungal infection. Tobacco from smoking also can also stain the nails yellow.

5) Nails Are Cracking And Flaking

This is the sign of brittle nails. It can also indicate any number of nutritional deficiencies. Make sure your diet is varied to avoid that from happening.

It could suggest iron deficiency or anemia.

7) Entire Nail Is White With Pink Band On Top

It is called the green nail syndrome. Commonly associated with a bacterial infection.

These are called Beau’s lines. It is an indication that the body is recovered from or is in the middle of major stress.

The nails and fingertips take on a rounded bulbous shape. Although you can be born with it and totally normal, it is usually associated with chronic lung disease.